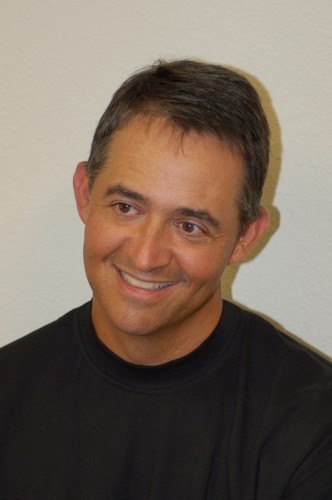 The first time I ever knew of Cary Millsap was when he gave the keynote speech at Kscope12. His presentation was about the many life and career lessons he had learned. I remember laughing, feeling empathy, and also relating well to his keynote. His slides blew me away—I learned a few great lessons about public speaking from that event. I then saw him again when he was the presenter at a DOUG (Dallas Oracle Users Group) meeting last year.

Cary is an icon in the Oracle world. A resident of the Dallas/Fort Worth area, he founded his own company, Method R, in 2008 and still runs it today. He speaks at events on a regular basis and is known for both his technical and presentation skills.

As I interviewed others for this blog series, Cary's name came up several times. "Yeah, he does...woodworking?" one person mentioned. Cary's name was also mentioned in the same sentence as "machine shop" and "I don't know exactly what you call his hobby." Intrigued, I decided to follow up. 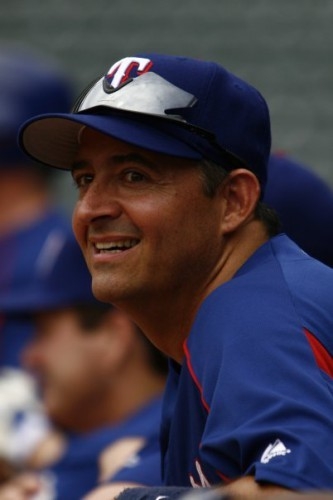 (Cary, the avid Texas Rangers fan! In this picture he’s in the dugout of Globe Life Park in Arlington, Texas, and the guy out of focus to his right is 1985 World Series MVP Jim Sundberg.)

Cary hates labels. Therefore, he originally left it to me to figure out the title of this blog post. Being ignorant on this particular hobby, I wasn't sure how to express this well so he came up with the term maker. We needed something that expressed both interests of woodworking and metalworking.

In a nutshell, Cary has a shop at his house. In this shop, he works with wood and metal. Cary often tells his kids: “There are two types of people in this world: breakers and fixers. It’s really easy to break things; it’s a lot harder to fix them. I expect you to be both.” He has created a place where his maker skills can break, fix, and create cool stuff. 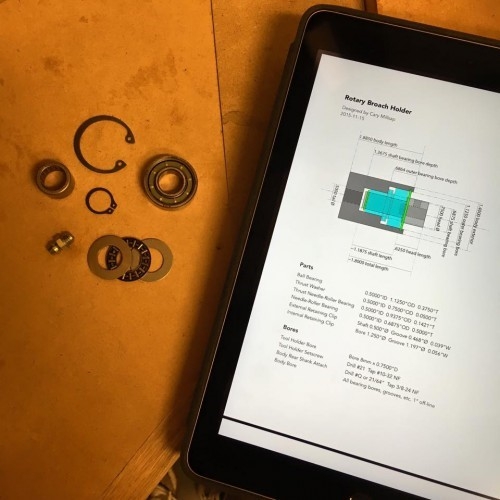 Over 18 years ago, Cary's hobby started with a need. He and his wife needed furniture. But what they wanted—the antique, sturdy, heavy wood kind—was really expensive (and still is to this day). Nothing they found was exactly what they were looking for. So he decided to build his own. He started this journey by buying and reading a bunch of books. He applied Agile methods to his woodworking and learned a lot through trial and error.

His first woodworking tool was a stationary belt sander. There was a wooden panel for the front of their dishwasher that the builder didn’t install. The cabinetmaker had cut it the wrong size, so the installer couldn’t put it in. So Cary used the sander to “sand to a line,” and made the panel fit onto the front of the dishwasher. This small project built up his confidence. So he thought, what the heck—let’s try to build a kitchen table! So he bought a cheap table saw, some chisels, and a drill press. 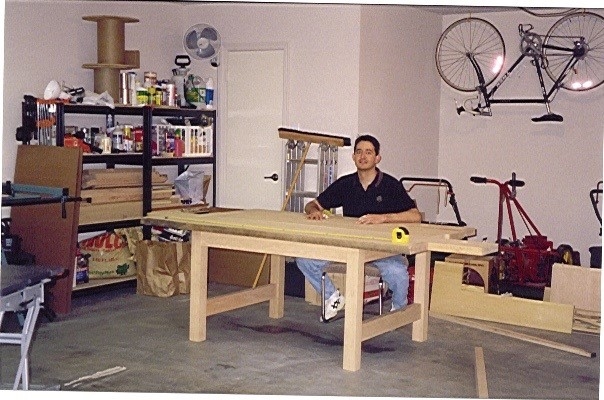 (Building the kitchen table in the Millsap garage—humble beginnings. Every night he had to move all this stuff out of the way so he and his wife could park their cars.)

He figured out quickly that to build a square table he had to upgrade the saw, but he ended up building the entire table from just these few tools. “So when you buy furniture, you pay a huge price for someone else’s work, and, of course, you end up with furniture. When you build it yourself, you buy tools with all the money you save; and then when you’re done, you get to keep the furniture and the tools!” 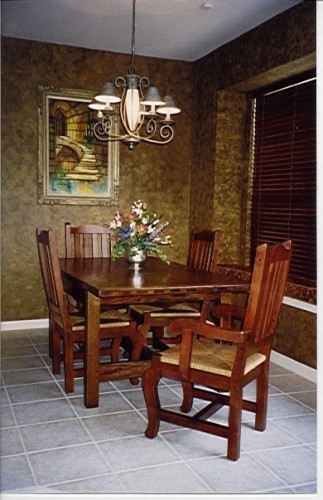 That successful project then led to various bookcases, picture frames, desktop accessories, a sewing desk, and even a solid walnut office desk for one of his employees. Eventually, he and his wife added a proper workshop to their home.

A few years ago, Cary decided that he needed to be able to work with metal, too. So with his wood shop, he built his own metal shop—his “miniature” metal shop. 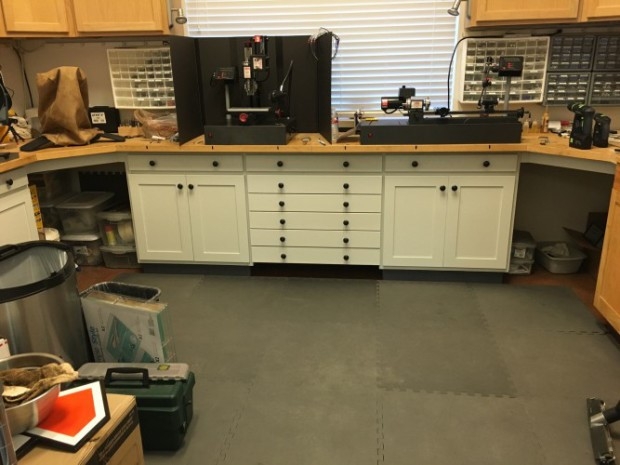 Why Metalworking and Woodworking?

In school, Cary studied math and computer science. When he went to work at Oracle Corporation in 1989, he was awestruck by the things that the people around him could do. “I was hanging around with all these people who could actually do stuff,” Cary said. “I could predict stuff, but these guys could actually do stuff. We used to joke that one of my friends in particular was so talented that he could take an old toaster and some bicycle parts and have Unix up and running on it in half a day. I wanted to be more like that. I had spent so much time living inside my own head; I wanted to be able to learn to do some things that I could actually show people.”

Cary wanted to learn how to turn a tree into a table. So he did. 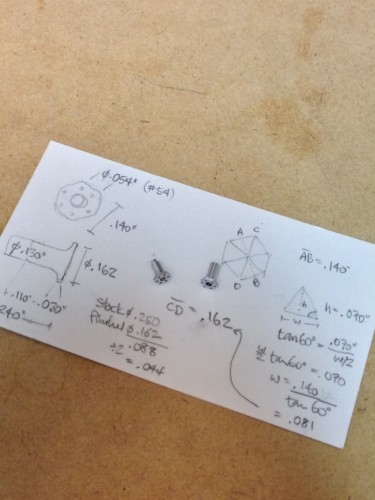 (Cary's hand-drawn plans for some whatchamacallits, some kind of flange-whatevers. Note the nerdy advanced math equations.)

Cary offers the following advice for anyone who wants to learn how to be a woodworker and/or metalworker:

People learn in different ways, and Cary knows this. He's the type of person who likes to read about something first—to get the theory of it in his head—and then try it. If you're like him, he recommends the book Tabletop Machining by Joe Martin. If you want to try this hobby out but not invest in all the equipment, you can find shops—“maker labs”—in your area that rent out the space and tools for a fee.

However, be forewarned: running table saws, lathes, mills, and other serious machinery can actually kill you. These machines can throw parts into your body if you don't use them properly. It’s way more dangerous than cutting off a finger, which is what most people are afraid of.

As a kid, Cary was a plastic model builder. It’s still an interest of his (in the winter months when there’s no baseball). A couple of Christmases ago, his family gave him a 1:8 scale plastic model of an early piston aircraft engine. Now with his lathe and mill, he makes scaled nuts and bolts that measure in millimeters. He actually uses a microscope to help him. Take a look at the below picture. 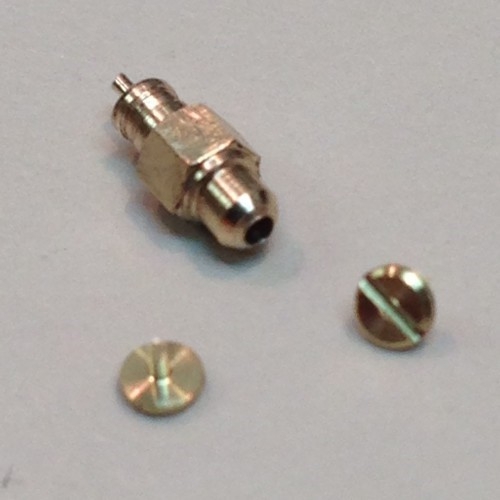 Seems like your set of standard random metal parts, right?

Good luck, Cary! Thanks for the great interview!