Happy Sweet Fifteen
Hyperion Financial Management (HFM) celebrates its 15th anniversary this year. It may be pure coincidence that in February, Oracle delivered the latest release of 11.1.2.4 with perhaps the boldest step yet in its 15-year history: platform independence. It is not coincidence, but rather through concerted effort by the Oracle development team, that this release is the fastest on record.

On second thought, one could successfully argue that release 11.1.2.2, with its configurable custom dimensions, or even 11.1.1.0, which was the first 64-bit release, could be equally as significant, but neither of these provided the racecar-like speed offered in 11.1.2.4, especially for so small an entry fee as “just upgrade.” The proof lies in the numbers, which I’m very excited to share with you here!

Independence from Microsoft
For the first time in HFM’s history, the application tier can run on a non-Microsoft Windows operating system. Oracle has chosen its Linux-based Exalytics platform for this foray and is considering non-Exalytics Linux platforms in the future. As a matter of history, we expect most HFM installations to be run on Windows Server 2008 R2 or 2012 for the time being, though customers with very large or very calculation-intensive applications should strongly consider Exalytics now.

Clients and Utilities
I should be clearer with respect to Oracle’s client and server strategy: the server-side components have all been re-engineered to run in a non-Windows environment, while client-side components will continue to move to the web or mobile platforms. Today, the vast majority of HFM users continue to operate on Windows 7 and 8.x platforms, though there is an increasing demand for tablet support including Apple’s iOS or Google’s Android.

What’s Included?
For the initial release of HFM 11.1.2.4.000, Oracle provides a number of Windows 32- and 64-bit clients, conveniently accessed from the Enterprise Performance Management System Workspace.

HFM Client
Essentially unchanged since the 11.1.2.3 release, enjoy it while it lasts: Oracle plans to move the remaining functionality to the web. To be clear here, as of the 11.1.2.2 release Oracle had already removed all HFM’s Windows client functionality except the metadata manager and application profile editor. In 11.1.2.4 Oracle has provided an excellent web-based profile editor, rendering the Windows client functionality redundant. I’m especially pleased to see that the application profile can be extracted from the HFM application, which is a welcome first for HFM.

Oracle Smart View for Office
I’ve worked with many users over the years whose interaction with HFM is entirely through Smart View. Smart View release 11.1.2.5.400 ships with HFM 11.1.2.4 and offers a handful of new usability features including a data range refresh and submit option. Smart View supports Office 2007 through 2013, 32- and 64-bit editions.

Financial Reporting Studio
Financial Reports continues to be supported for use with HFM and according to Oracle, there are no plans to change this arrangement. Certainly Oracle offers other reporting choices including OBIEE and the prebuilt OBIEE application Oracle Financial Management Analytics. The Financial Reports Studio client remains a Windows client and will remain so for at least the near term.

Server-Based Utilities
All of the Windows-based utilities that ran on the HFM application server have either been replaced or removed in this release.

Metadata Merge Utility
This is a new utility built originally for the Hyperion Tax Provisioning (HTP) product, but added to core HFM. The Metadata Merge Utility is a command line utility which can compare two classic mode XML metadata files, display the differences, and create a new file. The need for this utility arose from HTP since customer metadata changes must be merged with metadata changes delivered with each Oracle update of HTP. This feature will likely move to the web in the future.

Application Upgrade
The application upgrade utility, which has been a part of HFM since inception, has been merged into the EPM System Configurator. For customers on 11.1.2.x, Oracle recommends an in-place upgrade to 11.1.2.4 for customers on older versions of HFM there are a variety of paths to get to 11.1.2.4, none of which requires a rebuild of the application.

Copy Application Utility
Oracle intends to replace the HFM Copy App Utility used by customers worldwide, with a new feature called “Application Snapshot” in Life Cycle Management. I say “intends” because the Snapshot feature in its first incarnation has some limitations that leave us without a solution. The greatest concern is that for customers who have very large applications perhaps exceeding 100 GB, the snapshot feature does not write directly to the database server, but instead creates a binary file in Binary file stored in \Oracle\Middleware\ user_projects\foundation\import_export on the EPM Foundation server. The concern is that this process can cause the Foundation server to run out of disk space during the copy or after multiple copies have been made. 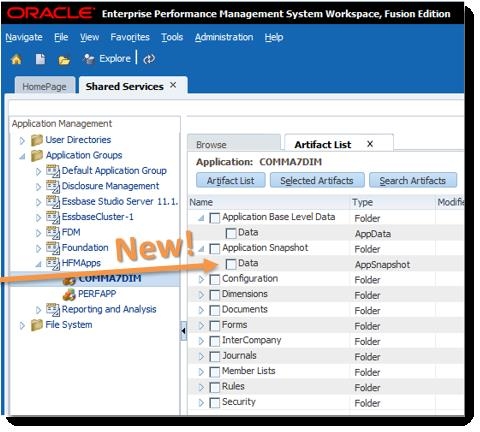 We can’t duplicate or rename an application within the same environment. Initial performance is poor: in testing we saw a small application, less than 1 GB in size, take two hours to create a snapshot. In contrast, it took four minutes to re-shell the application, plus a little more time to reconsolidate. Oracle has heard our concerns at this point and we can only hope for improvements in the near future.

Rules / Member List Editor
The Configurable Dimensions feature in 11.1.2.2 brought significant changes to the user interface, and with that, Oracle needed to do something for the ancient rules editor. What we got is the very usable HFM language add-in for Notepad++ which has been well adopted by the community. This continues to be true with HFM 11.1.2.4.

It is important to note that 11.1.2.4 still uses the same VBScript language for rules, and Oracle still supports both classic VBScript rules in addition to Calc Manager (which still generates VBScript). There are a few new functions in classic mode as well as some minor updates to Calc Manager.

Rules Migrator
When Calc Manager was introduced with HFM 11.1.1, Oracle bundled a utility to convert classic mode rules into Calc Manager objects. Without discussing the complexities of that conversion, I would only like to say that Calc Manager 11.1.2.4 allows you to directly import a classic mode rules file (*.RLE format) into Calc Manager, and it will perform the same sort of conversion for you as the migrator utility did. It is an easier process now, but the conversion depends entirely on the structure of your rules file. At a minimum you will end up with a series of Rule Sets, which contain script objects.

Error Log Viewer
Perhaps my favorite utility ever, the HFM Error Log Viewer which has shipped with HFM for many years has been deleted. Oracle has done an excellent job over the past few years of presenting the system messages in the web client. Users granted the Shared Services role Financial Management Manager > “Financial Management Administrator” can view and manage HFM system messages in the browser.

Prior to 11.1.2.4 HFM system messages were written to numerous places:

With 11.1.2.4 HFM only writes to the HFM.ODL.Log file, using Oracle’s diagnostic logging standard format. That file can be found in Oracle\Middleware\user_projects\epmsystem1\ diagnostics\logs\hfm 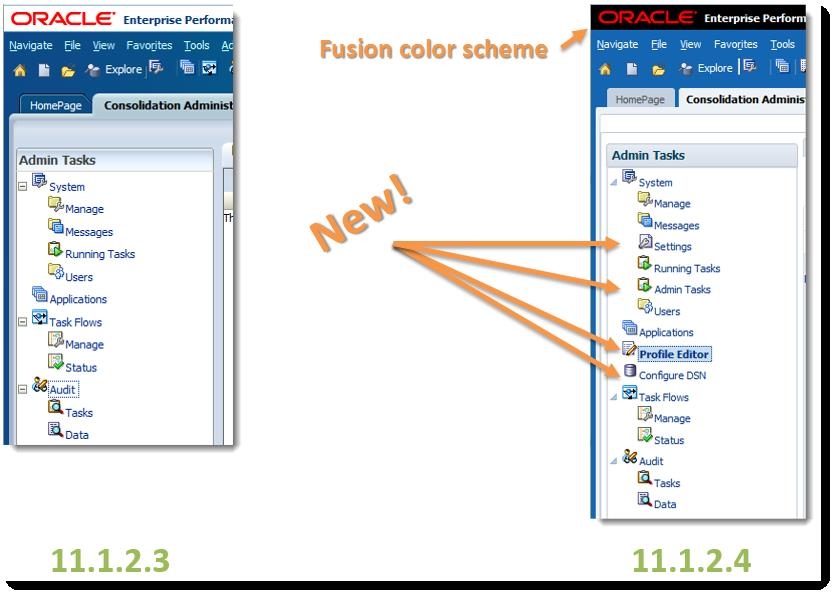 Configuration Management
The best administration feature in years is the System Settings module in 11.1.2.4. This not only replaces the registry settings that controlled HFM since inception, but provide an audit trail of changes in addition to the excellent documentation for each setting that was included in 11.1.2.3 – except this time the documentation is directly in the user interface where you would make changes. The 29 different configuration settings are also documented in Chapter A of the HFM admin guide. Kudos to the HFM development team for this! 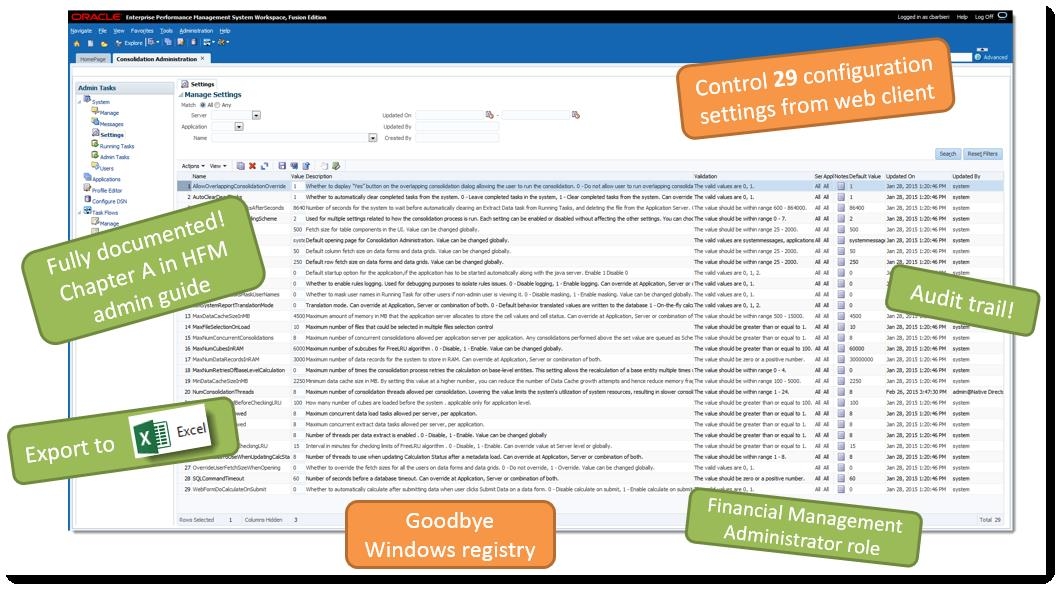 Built for Speed
I’ll make the grand finale of this article be the centerpiece of HFM 11.1.2.4: Built for Speed! Oracle didn’t just provide multi-platform support, but they really made sure this release of HFM could showcase Exalytics and make it a compelling investment for customers.

Optimized for Exalytics
Oracle put a great deal of effort into optimizing HFM for consolidation and reporting. Through release 11.1.2.3, HFM was run mostly on servers with 8-16 cores and often 16-24 GB RAM. Though the majority of HFM applications don’t use more than about 6 GB RAM, there are certainly some that I’ve seen consume more than 32 GB RAM. HFM was designed in a way to use a single processor core to consolidate multiple children into a parent entity. Visually, you could see that as the consolidation processed approached the top entities fewer cores were in use. This prompted administrators worldwide to ask if there was a way to force HFM to use all available processors in order to complete faster. This was not possible due to the previous architecture, but it is now an essential aspect of the performance gains in 11.1.2.4.

To make the most use of the available processors, 11.1.2.4 was redesigned to update the calc statuses with greater parallel processing than before. The HFM development team also eliminated calc status updates to currencies that were neither the child’s nor the parent’s default currencies, which provided another major improvement to consolidation time.

Another area the development team worked hard on was that of efficient memory management. HFM uses an internal memory manager called Smart Heap that had to be tuned to run as fast as possible while also allowing HFM to access more memory than ever before. With more data in RAM, HFM can perform Read-Write operations like consolidations and Read-only operations like Smart View and Financial Reports activities much faster. This also benefits large grids and Intercompany Matching Reports.

Test Results
During some of their tests for 11.1.2.4, Oracle established the following settings for an Exalytics server. 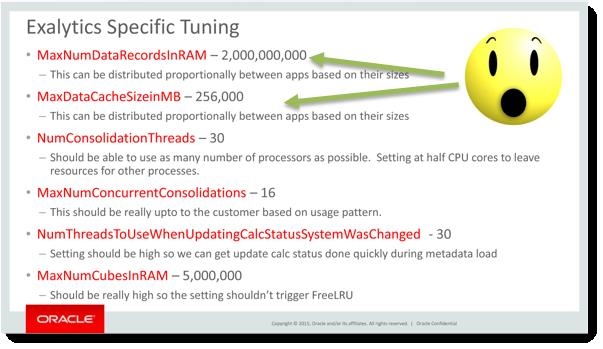 In the spirit of openness, I have to admit that I added the emoticon above (its true!). I was surprised, bordering on shocked, to see how much memory and processors HFM was able to take advantage of. Consider this: Most of the settings above are more than 100 times what I typically see for 11.1.2.3 and earlier!

Performance Gains Independently Verified
What does it all mean? In order to put this in context, I used the Finit Solutions benchmark HFM application and performed an “apples to apples” comparison of 11.1.2.3 to 11.1.2.4. I saw a consistent 65% reduction in consolidation time (red bars below), due solely to the version upgrade with all other things being equal. Please also note that my test was on a typical Windows Server 2008 R2 virtual server – a commonly used configuration. I can only imagine what the results might be on an Exalytics machine!

Oracle performed many tests and provided the results here. Since I ran my tests on Windows, I wanted to see their real-customer application testing on a similar environment and it seems my tests confirmed what they already saw: about a 60% reduction in consolidation time. 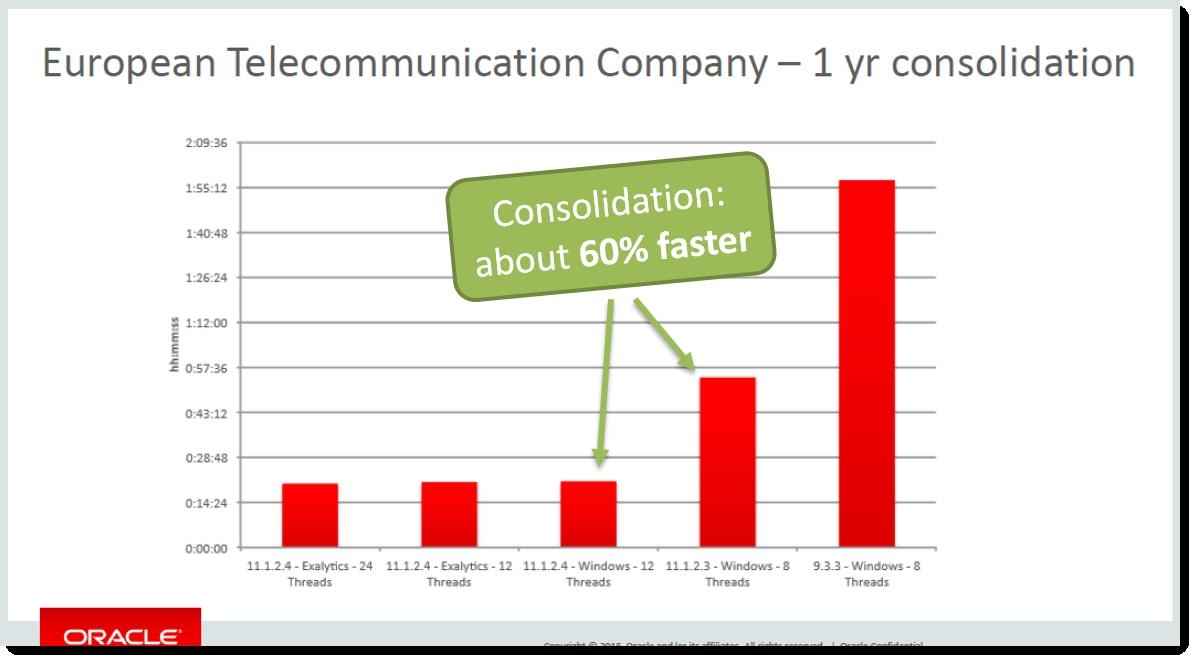 You might notice that data load times in my test were actually longer in 11.1.2.4 compared with 11.1.2.3. I confirmed this with Oracle that this was a bug that should be fixed by press time. I can only imagine consolidation times should be even faster with this fixed.

Thanks to Oracle for many of the details I shared here, the screen shots, and the adrenaline shot to our consolidation times!

ODTUG would not be the organization it is without all our amazing volunteers! First, we would like to thank everyone who has given their time and dedication to making each of our communities one of a ...
ODTUG 2020—A Year Like No Other

Although this year did not turn out as planned, the ODTUG community came out strong, and despite the odds, we made 2020 a year of connection, collaboration, and inspiration. Thank you to all of our vo...
December 2020 Oracle Events

December 2020 Oracle Events
Announcing Breakthrough MySQL Innovation in the Cloud
December 2, 2020 from 9:00am PT to 10:00am PT
Accelerate Your Business with MySQL