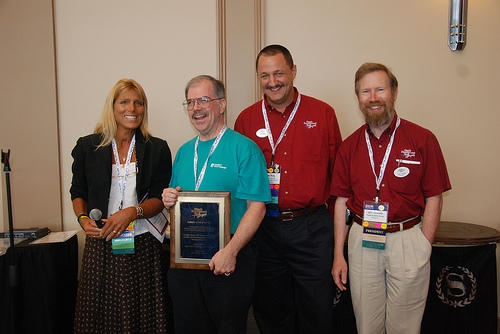 I asked longtime ODTUG friend, speaker, attendee, volunteer, and 2008 Editor’s Choice Award winner John Flack to share some of his thoughts about ODTUG Kaleidoscope, and also about Washington, DC. So, without further ado, here we go!

MR: Who should Kaleidoscope attendees plan on seeing a session from, and why?

JF: “I’m glad to see Warren Capps back as a presenter, and I’m looking forward to hisData Modeling presentation.  I think so many problems can be solved early on if people will take the time to model their data first.  I see that Warren will be looking at features of the database that can make development easier.

I’m heavily into development with JDeveloper and ADF, so I’ll be going to many sessions in that area.  I’m always impressed by the number of people that Oracle sends to Kaleidoscope.  I’m glad to see that Peter Koletzke and Duncan Mills, are doing apresentation on the JDev/ADF deployment process.  They are both great presenters, and I really need this topic.”

MR: What differentiates Kaleidoscope as a conference from other conferences out there?

JF: “The focus on developers is unparalleled, and the number of people is just right.  There are enough great developers there to make sure that there will be at least one person that is doing the kind of things you are doing, and few enough that you will get to meet that person.  Just watch who’s attending the same sessions you are, and strike up a conversation.”

MR: Can you tell us what your best memory is from a Kaleidoscope conference that you’ve attended previously?

JF: “I’ve always appreciated the international contingent at Kaleidoscope.  One morning I had a lovely breakfast with some of our attendees from Denmark.   We didn’t talk shop, and I forget exactly what we did talk about, but I’ll remember the good feeling for a long time.”

Here’s a quote from John about ODTUG Kaleidoscope – “Great developers helping developers – how could you help learning something worth the price of admission?”

MR: If you’ve been to Washington before, can you recommend one thing that a first time visitor should take advantage of while visiting during Kaleidoscope?

JF: “I’m a native of the Washington area, born in Georgetown, raised in Springfield, live in Alexandria, and work in Arlington.  Take off early one evening and head to the Kennedy Center.  There is a free shuttle from the Foggy Bottom/GWU Metro station.  Every evening at 6PM there is a free (yes, FREE) 45-60 minute performance on the Millennium stage in the foyer.  Performances range the entire gamut of musical styles, and occasionally theater and dance as well.  You can see the schedule of daily  performances at http://www.kennedycenter.com/programs/millennium/schedule.html

You may have heard bad things about our Metro system, and be worried about your safety on the system, especially after the accident that happened while we were in Monterey last year.  I ride Metro to work every day, and it has always been clean, comfortable and safe.  It is also far preferable to the horrors of our traffic.  Despite the problems, I still advise you, don’t rent a car, take Metro.  It goes everywhere you’ll want to go (except Georgetown, but there’s a bus shuttle for that) and will get you there more safely than by car.

Don’t rent a car, you won’t need one. The hotel is right next to a Metrorail stop on the red line. Most of the attractions you’ll want to see are accessible by Metro. Reagan National Airport is on the Metro.

If you’re on a budget, and don’t mind a little crowding, Metrobus’s 5A line goes from theL’Enfant Plaza and Rosslyn Metrorail stations to Dulles Airport for $3.10 and the B30 bus goes from Greenbelt station to BWI Airport for the same price. There is a more comfortable Washington Flyer bus that goes to Dulles from the West Falls Church stationfor $10.00 each way or $18.00 round trip.

Been here, done that? Here’s a suggestion for some attractions you probably haven’t seen: Go to the Brookland/Catholic University station. Walk toward Catholic University to see the magnificent Shrine of the Immaculate Conception, the largest Catholic church in America. Nearby is the Pope John Paul II Center which houses a very good art collection. Or from the station go about half a mile in the opposite direction to the Franciscan Monastery. The monastery is like a one stop tour of religious sites from around the world – it has duplicates of such places as the Church of the Nativity in Bethlehem, the Shrine of Lourdes, and Roman Catacombs.

If you bring your kids, take them to the zoo. It is a short walk from the hotel, *free*, and one of the best in the country.”

Thanks for all of the information John!  I’ll see you in a couple of weeks!

Check Out the Speaker Lineup for the ODTUG Kscope21 Virtual Event
March Madness is back! Though we can’t help you fill out your bracket, we can guarantee you a win with our newly released s...