Well, it's pretty early after a late night of fun, and writing the blog post from yesterday. But fortunately, I had a reserved seat waiting for me (cool, huh?) :). 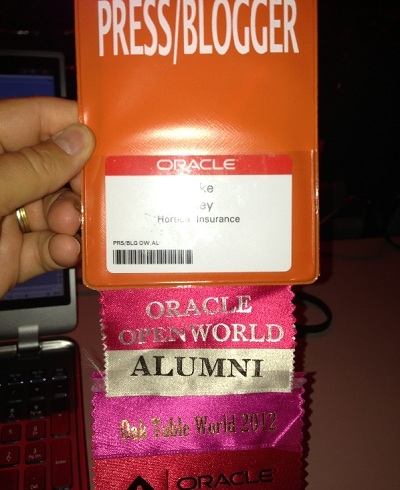 This was at Moscone North for the Mark Hurd keynote. I was fortunate enough to get a Press/Blogger badge for the event through the Oracle ACE program, so I am planning on taking advantage of this at least once. The good thing about this is that I get a guaranteed seat.

Its 8 AM here in SFO (don't snicker about me saying that is early, I know it is really 10 AM back in the Land of Lincoln where I hail from). What is the big news of this keynote? Well, stick around; I hope to find out very shortly. The title and abstract of the keynote:

Removing complexity requires thinking differently about how IT delivers value to your company. Oracle President Mark Hurd kicks off the first full day of Oracle OpenWorld by hosting some very special guests. Topics include what’s next for the database, how simplifying and consolidating IT systems can benefit everyone from the DBA to the CEO, and how the data center and information systems are fundamentally changing the ways that IT services are delivered and managed.

Mark Hurd, President of Oracle will be hosting the keynote, and it is expected that we'll hear from Andy Mendelsohn, Senior VP of Database Server Technologies, and Juan Loaiza, Senior VP of Systems Technology.

OK, what follows is some quick thoughts as the keynote unfolded. If you get bored, skip through them.

Judy Sim starts the show, Chief Marketing Officer for Oracle. This is the 30th year of Oracle OpenWorld (well, it was user group run at that time). 50K attendees in person, 1 million virtually, 144 countries, 100% of the Fortune 500 companies are represented. Judy is just talking about what is going to happen during the week.

Safe Harbor statement is recorded and shown now, drawing some chuckles from the Press area.

Mark Hurd is taking the stage. Starbucks gets a quick plug. Oracle Strategy is to be market leader in the complete stack: Applications, Middleware, Database, Operating System, Virtual Machine, Servers, and Storage. “No single customer without an innovation agenda, and an austerity agenda.” Oracle is the only company capable of attacking both items on these companies’ agenda.

Juan Loaiza takes the stage here. Exadata is going to be the focus of his talk today. Consolidation of server, storage, and network into single machine. There are 1000's of deployments of Exadata systems at leading companies, half are in OLTP systems, and half are in data warehouses.

Nat Natarajan, VP of Technology Operations at PayPal is on the stage talking about their experience with Exadata for massive scale OLTP transactions. These are petabyte scale OLTP systems one of the largest OLTP systems around.

Now we hear about Exadata X3...22 TB of flash memory with 2 or 4 TB of DRAM memory, PER RACK, holding up to 220 TB of compressed data. Flash is being used for all I/O's. It used to concentrate on reads only, now applies to writes as well.

Jerry West, NBA Legend is talking about teamwork and setting goals. What an icon! If you know the NBA logo, the outline is Jerry West. Jerry related that his greatest achievement was not an NBA title, or an MVP, but rather the Olympic Gold Medal that he won as an amateur. Very inspiring, and cool to hear from him.

Well, that was it for the keynotes for me today. A majority of the rest of the day was spent manning the ODTUG Booth. Lots more folks to talk to and educate about ODTUG. As good as we are, we are not known everywhere, so every person that hears about us is another potential valuable member of the community.

One cool thing that I got to do was to get my picture taken with Team Oracle stunt pilot Sean Tucker. He has been doing this for many years, and actually initially had a fear of flying. I know that sometimes I have a fear of getting in an airplane at all, much less one that is doing loops and barrel rolls. Anyway, here is my picture with Sean: 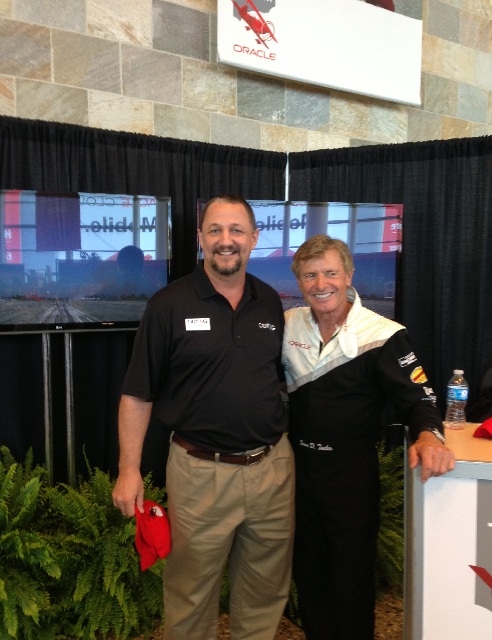 Monday evening, we hosted a reception at LeCharm. Four blocks away from the Moscone Center, we had a great time celebrating with about 100 ODTUG friends. Good times and great fun. It is important that we take the time to celebrate with our speakers and supporters.

At the end of the evening, we spent a little time listening to the reggae vibe of Jimmy Cliff. It was a great ending to the evening at the Oracle Music Festival.

Check out some of Monty's pics of the ODTUG Reception below