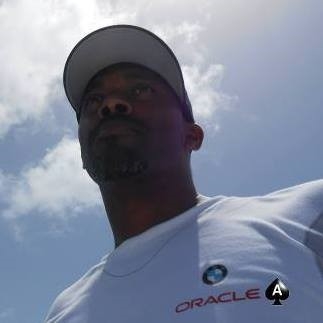 Ginga (jeen-gah): the fundamental movement in capoeira. It has two purposes:

(the ginga - the fundamental movement in capoeira)

If you've never met Danny Bryant, you should seek him out immediately at the next Oracle event. I've had the privilege of knowing Danny for a few years now and he's super-cool. He's super-friendly and you can talk to him about anything – you can shoot the breeze over a beer or you can discuss the fundamentals of Oracle data integration. Danny is pretty passionate about the ODTUG community. He's so passionate that not only is he an ODTUG Board Director, but he's also the Kscope16 Conference Chair. 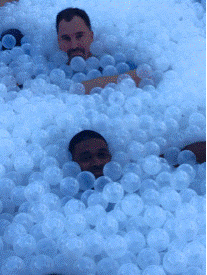 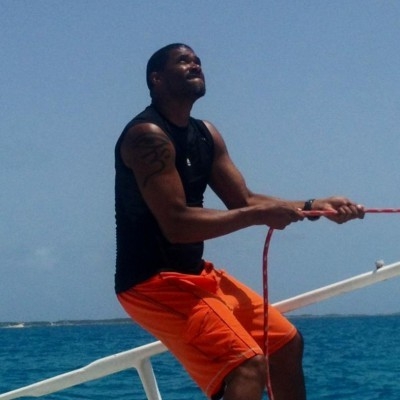 (assisting with the boat sail for a scuba dive event)

But let's get to the heart of this article. If you caught the Kscope15 promo video, you might have wondered about one of Danny's clips. In the sand, Danny was doing a martial art called capoeira. Although it's described by some as dance, he would describe it as a combination of martial arts, music, and dance. "The reason they want to say dance is because it combines music and movement," he explains. Hmmm...let's take a moment to ponder his training. Not only is there a physical component to it, but he also has to learn how to play instruments and sing, as well as handle other types of feats.

(spitting fire – this is used during dança do fogo)

The history of capoeira began in the 16th century with the African slave trade in Brazil. In order to protect themselves, slaves taught themselves this practice and hid it in the music. This prevented slave masters from discovering what the slaves were doing. Eventually, capoeira migrated across the world. It made its debut into the United States in the 70s. 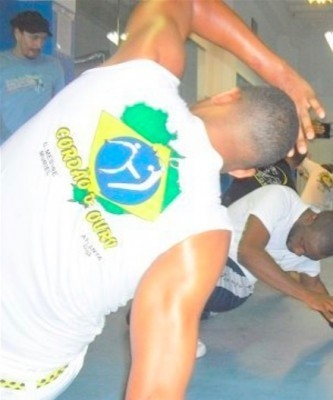 Danny explains that there are three styles of capoeira: regional, contemporânea, and angola. Although they may look similar to the untrained eye, the truth is that they have different types of movements. The style that most people might recognize from pop culture is contemporânea. This is a bit more acrobatic, and capoeiristas can be seen doing flips. This style of capoeira often attracts attention and new students to the art. Regional is faster and more upright, and the ginga movement is different. Angola is related to the original form of capoeira and is older. This one has a special technique that is lower to the ground and incorporates more deceptive movements. While these differences do exist, Danny’s capoeira mestre believes that capoeira is capoeira and, as such, you should be comfortable enough to play in any roda. 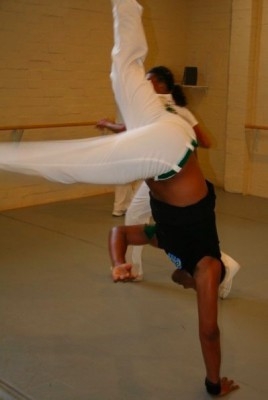 (Danny standing on one hand, as part of his capoeira movement)

Danny originally started his capoeira training to lose weight. The use of capoeira in the movie "Only the Strong" initially caught his attention. He was drawn to the music, acrobatics, and movement. This stayed with him over the years, and when capoeira became available to him in Atlanta, his wife signed him up for the class. The rest, as they say, is history. Danny has been training in capoeira now for over nine years. He finds this martial art attractive because "the intention is not violent; it's more about how to avoid violence," he explains. 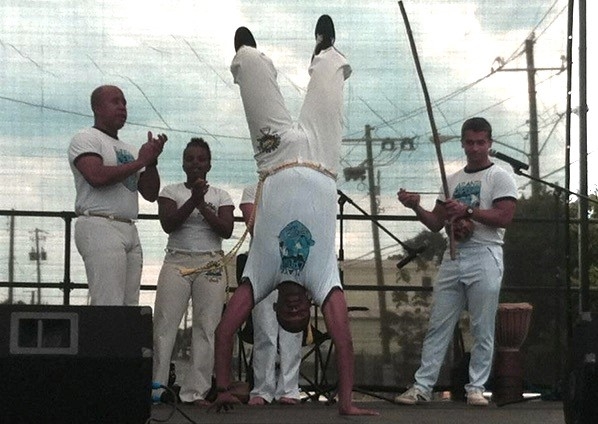 However, capoeira wasn't Danny's first martial art. By nature, Danny grew up athletic, with basketball, track, and wrestling to keep him company in his younger years. Then in the 90s he moved on to martial arts. Some of the training that he's taken: hapkido, shotokan karate , kali, judo, silat, and jeet kune do. To this day, he still trains in jeet kune do, in addition to capoeira. 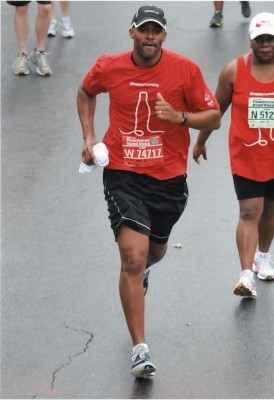 Due to Danny's current commitments, his typical training routine involves about two hours per week. There was a time when he would go three times a week, teaching two classes and training in one. During his current weekly regimen, he's both physically training as well as learning the instruments and songs. It might seem odd that music is so ingrained into this martial art. The truth, though, is that it's required based on how the capoeira game is played. There are messages in the music that dictate the rhythms and the movements that are both allowed and not allowed. Some rhythms can only be played at certain times. There are also secret messages in the songs. In addition, when Danny learns the songs, he has to learn them in the native Brazilian/Portuguese tongue. 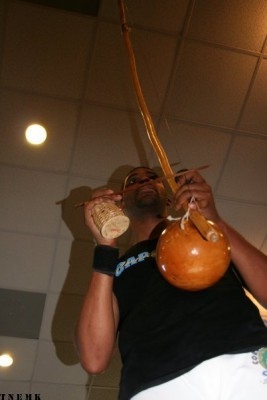 (playing the berimbau – the primary instrument for capoeira)

Danny's favorite thing about capoeira is the full immersion into the Brazilian culture. It's not just an opportunity to learn a martial art but “a combination of opportunities to learn a martial art, a form of music, and a language. Wrapped up in the songs that you sing is the history of the culture," he says. Also, this martial art is unique in that it bases its roots in Africa – most martial arts are based in Asia. In addition, it's a great way to burn off some serious calories in a single class (over 1,000) due to the fact that you're constantly moving. Finally, anyone can do it. People of any age, any gender, and any body type can learn and perform it. As proof of this, Danny's proud to share this craft with his young son. 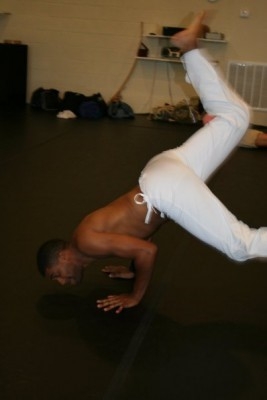 Danny's made his way up in capoeira. Capoeira uses a braided cord system to indicate level. Depending on who your mestre is, the cords can be weaved from a combination of colors. His group's colors are from the Brazilian flag. Right now Danny has eight cords, and the next one is instructor. He is currently three levels down from mestre. 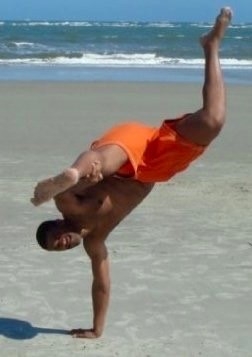 (capoeira in the sand – beija flor)

Capoeira Is for Me – How Do I Get Started?

Danny offers the following advice for folks who want to try their hand at capoeira:

Keep up the ginga, Danny!