Summary
Our last article on this topic was a Q&A interview with Oracle on the announced new functionality for attribute dimensions in PBCS. This follow-up article shows how to use the functionality. Pay close attention to the use of attributes in web forms to avoid the frustration I experienced in learning how this worked -- until I uncovered the trick I’m about to reveal.

Attribute Dimension Functionality in PBCS had been limited, but the latest announcement from Oracle both closes the gap and improves functionality. “You can now use an attribute dimension as a dimension, as a filter in forms and reports, and within ad hoc grids.”

Attribute Dimension Web Form Design
Filtering by attributes in Planning Web Forms has been available in both on premises and PBCS form design for a long time however that old functionality is limited. The final report definition had a static list of members selectively chosen but not the actual attribute filtering logic used to create the list. That’s a limitation because as members are added to dimensions or as attribute changes the list of members needs to be manually updated.

Oracle has now improved the use of form design using Attribute Dimensions not to merely filter a static list, but to make the attribute selection part of the filtering logic. Hooray, no more static lists! Web forms defined using this functionality will no longer need maintenance as the outline changes.

PITFALL – Don’t drag these attributes to the POV, Page, Row or Column

I experienced challenges getting attribute dimensions to work in a web form that allowed data entry. I actually complained to Oracle several times, worried that I did not have the correct release of PBCS. It turns out I had the correct software but I was using it incorrectly. My natural reaction when creating a web form was to drag the attribute to the POV, Page, Row, or Column. When you do that you automatically create read only data input form. A read only data input form is an oxymoron. 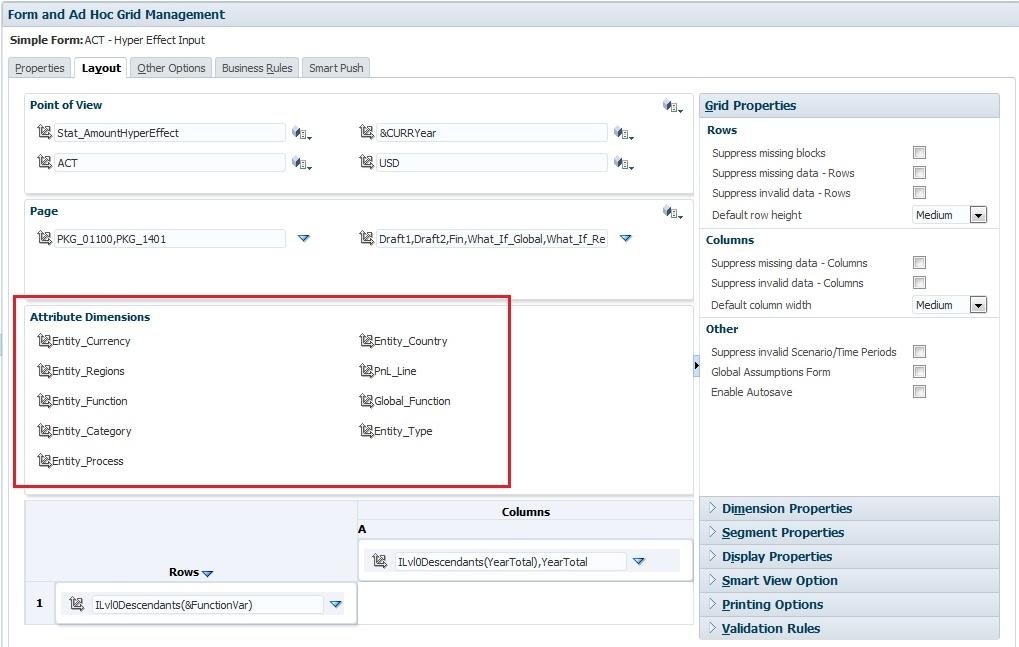 Consider the following web form that has the attribute fund on Entity. When we retrieve ILvl0Descendants(E0564) we get all of the L0 members which have various Fund Codes.

Now using the new functionality I wanted to filter on a fund or two. To do this I incorrectly thought to filter on the Fund Attribute by dragging it to the row in this case.

Surprise! This does not work. The form becomes read-only. The results are not filtered by fund 11. So what was I doing wrong?! Many emails to Oracle and some timely help from Oracle Ace Celvin Kattookaran at KScope we uncovered the reason. To allow data input to a web form don’t use the attribute dimensions, instead use the dimension they’re attached to as a filter. For example, don’t select “USD” for the “Entity_Currency” attribute. Instead, navigate to the Entity dimension and filter it out there in the variables/attribute section. I don’t think it is intuitive to look for attributes in a section tab called variables, but that’s where it is.

Using the example started above, the dimension associated with the attribute dimension, in this case it is the Entity dimension. We then select variables/attributes and define the filter. 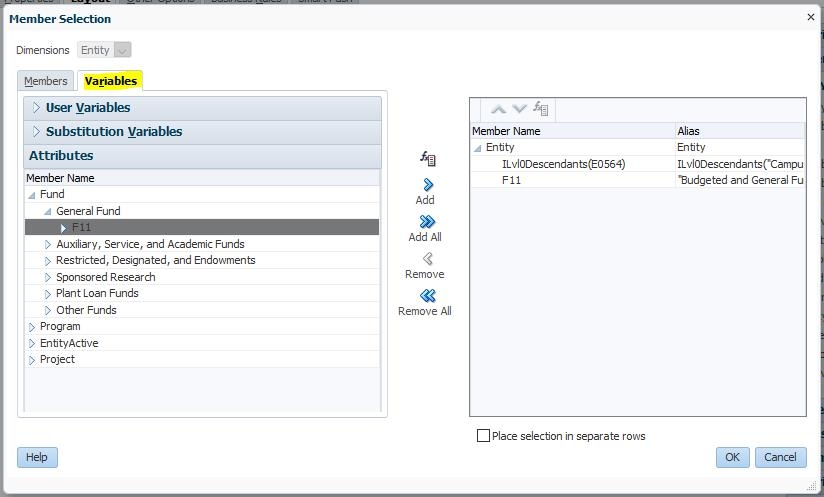 The new form definition is shown below, notice the “Fund’ Attribute dimension stays put in the “Attribute Dimensions” box, while the actual attribute for ‘Fund’ is found on the row definition for the Entity dimension.

And, Voila! The form successfully filters on the correct funds and allows data input! Only two of the L0 members are have the attribute “F11” and only these are retrieved.

If there is one take-away from this article it is this: Go to the ‘Variables’ tab to filter your attribute dimension on the dimension the attribute is associated with.

Attribute Dimensions in Smart View
Download the latest version of Smart View and you’ll see a new option, “Insert Attributes.” Prior to PBCS release 16.07 this option was greyed out, and now it is available.

I added “Fund” as an attribute to Entity in the Visio app. I’m now able to analyze by Fund in Smart View using a Planning connection. 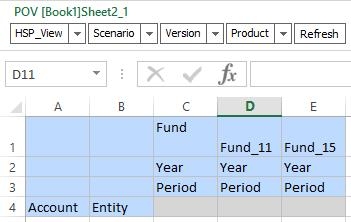 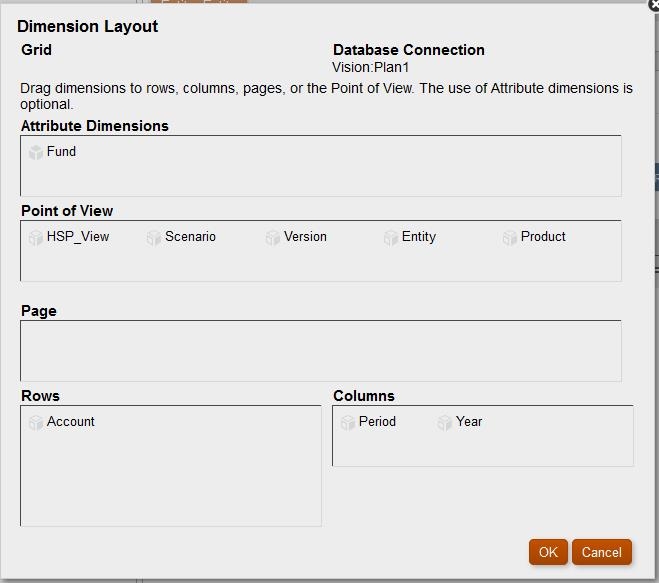 Summary
Attributes are here in PBCS! The most interesting use is in filter definitions for web forms – and you have to set the filter on the Variables section in the dimension associated with the attribute. Smart View and FR Studio previously did not have attributes for Planning connections and now they do. All three are welcome improvements to PBCS.

Essbase Day – Sponsored by Applied OLAP, Hosted by ODTUG!
Essbase 21c is here and we are celebrating by providing more than just great content! Play throughout the day as we honor...
EPM Community Newsletter October 2020 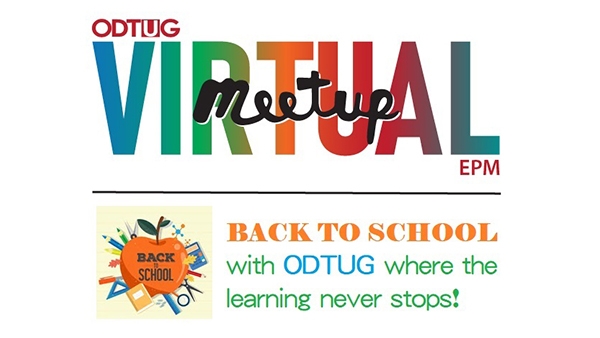 Join us for the ODTUG EPM Back to School Meetup sponsored by Applied OLAP and Turrell Consulting. You'll hear about the latest Strategic Modeling and other EPM Product Roadmap features, things yo...